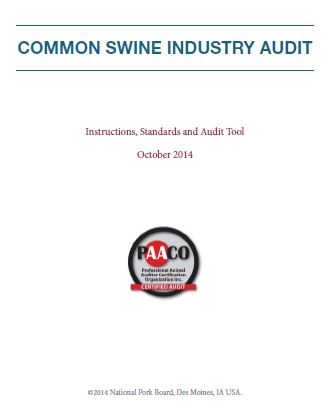 One of the biggest changes in pork production in 2015 will be the implementation of the Common Swine Industry Audit (CSIA). The well-defined evaluation criteria of the CSIA will give pork producers a clearer understanding of animal welfare and food safety standards. It will also give buyers and consumers a system by which to measure farms’ performance in these areas. Basically, the CSIA gets everyone in the industry – from farm to pack – on the same page for pork production.

Many of you have probably participated in audits already or heard of someone who has. Previously, the criteria for such audits depended largely on the buyer (i.e. packer) or third party auditor visiting the site. The new CSIA will be used by all third party auditors going forward to maintain consistent standards and reduce producer confusion.

How do I know if my farm will be audited?

If, when, and how often your farm will be audited depends on the market to which you sell (i.e. packer). Consequences for refusing an audit will also be determined by the buyer.

What topics does the audit cover?

The CSIA covers 27 key aspects of animal care and food safety from birth to transport. These 27 keys can be broken down into four categories: Records, Animals, Facilities, and Caretakers. You can download the audit tool materials from the Pork Checkoff website to view standards in depth.

What determines if I pass or fail?

There are five areas on the CSIA that are automatic pass/fail questions. These all relate to willful acts of abuse and timely euthanasia of animals. Receiving a fail in any one of these areas is an automatic failure for the audit. Even if a farm fails in this phase the remainder of the audit will be conducted.

The rest of the audit questions are assigned a set number of points. If a farm meets the minimum standard for each question it is awarded the points. Farms that do not meet minimum standards for questions will receive no points. The farm is given a score for each section as well as an overall score for the entire audit. No minimum score to pass has been established at this point. Instead, scores are compared to industry averages and areas of concerns are addressed. Ultimately, it will be up to buyers and consumers to determine which scores are acceptable.

If an auditor finds a problem with the farm that is considered unacceptable the farm will have 10 days to complete a corrective action if the criteria is considered critical or 30 days for all other criteria. Buyers, such as packers, will be responsible for reviewing corrective actions to determine if problems have been adequately resolved.

What if I have multiple sites?

The CSIA corresponds with your farm’s Premises Identification Numbers. Each production site has its own corresponding PIN and will need to have its own audit. CSIA results are only valid for the site at which the audit was performed.

How does this relate to PQA Plus?

The goals of PQA Plus and the Common Swine Industry Audit are fundamentally different. PQA Plus is designed to educate producers and allow them to benchmark their farm against others. PCQ Plus gives you a source of measurement and feedback to improve caretaker training and pig health management. The CSIA does not have an educational component and is instead an objective evaluation by a third party. It provides verification to buyers and consumers that the pork industry’s standards of animal welfare and food safety are being followed on the farm.

Your farm will still need a PQA Plus site assessment even if you are audited. Conversely, your buyer may request a third party audit even if you have met all requirements for PQA Plus.

Will the third party auditor follow my biosecurity protocol?

The auditor who comes to your farm will be required to follow biosecurity procedures that have been communicated to them prior to their visit. If your farm does not have a written biosecurity protocol in place the auditor will follow the basic biosecurity principles outlined in the Common Swine Industry Audit instructions.

Bottom line – How will the CSIA change the way my farm functions?

The answer to this question depends largely on how your farm currently runs. For most producers, the CSIA will likely change very little about day-to-day operations. If you’re already doing the right things there’s probably little you’ll need to worry about. To be prepared, read through Pork Checkoff’s CSIA FAQs and review the audit materials to have a better understanding of what will be examined during an audit.